Removing the engine and gearbox from an XK engined E-Type is relatively simply. In the original workshop manual, Jaguar list two methods, first to lift the engine out from the top, and the second method is to lower the engine down into a pit. (Later versions of the manual only gives the first method)

For the home mechanic who is concerned about lifting the weight of the engine and gearbox to great heights and who does not have access to a pit, then this second method can be modified. Rather than lowering the engine into a pit, simply lift the car from the engine. See below.

Make padded support for over riders, release bonnet retaining support springs and raise bonnet to the point where there is no load on the bonnet hinges.

Support bonnet from above. Remove hinge bolts and roll car back

Roll engine and gearbox from beneath chassis. 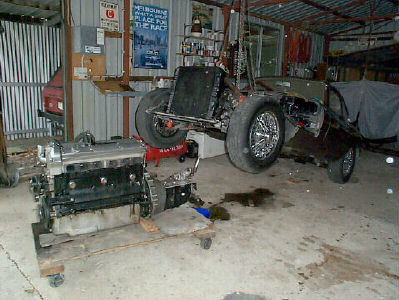 Replacing is the reverse of the above. Enjoy